The brown trouts of Eastern France are uniquely colored: their flanks are banded in light and dark shades which gave them their nickname “tigre du Jura” which translates to “tigers of the Jura” (Jura = landscape in Eastern France). The “tigers” are native to rivers like the Doubs and the Loue, in which flyfishing-legends such as Charles Ritz loved to fish.

So when the decision fell to spend the summer holidays in the Jura, I was excited to be able to dare these legendary browns. 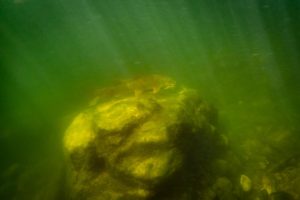 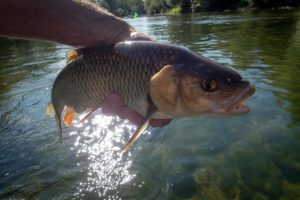 But my hopes quickly faded when I arrived: In the lower Jura where we had set up our camp, the Loue was still a beautiful river with gravel banks and deep riffles, overhanging bushes and large rocks, but my feelings were, that this was no trout water. 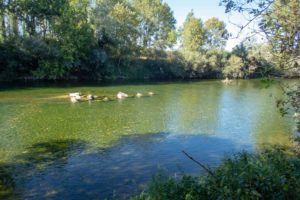 There were chubs and barbels and nases everywhere but I highly doubted that in this stretch of the Loue, a stable trout population existed. So during the first few days of my holidays, I enjoyed all the other nice things France has to offer, especially good food and an occasional glass of wine.

My wife was deeply worried as she had never seen me NOT fishing while we stayed near a river, and so one day she said words I had never heard before from her lips: “Don’t you want to go fishing this evening, honey?”…. erm, pardon madame? Did you really say that? …so of course, off I went, chasing chubs here and there, and faintly hoping that I had been mistaken, and a “tiger” might find the way to my nymph or streamer. The chubs were massive, and were good sport. 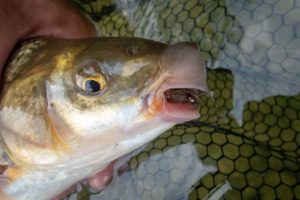 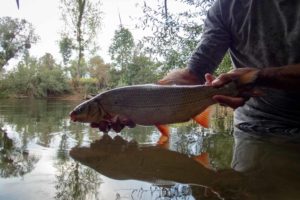 Also, I managed to catch my first nase ever, a very nice fish with exactly 50cm. At the distance I had mistaken it for a chub and cast for it with my favorite chub-and-perch-streamer. The nase smashed the streamer like a predator, and I was really surprised when I saw what kind of fish it was!

But trouts did not show up, I guess there really were none. I also tried to go into the tributaries, like the Cuissance. This creek was colder but still I saw only nases and chubs, and rumors say that it once was a nice trout water, but that agriculture now pollutes it and draws way too much water from it.

I crawled through the jungle on its banks, trying to find secrets spots which probably hardly anyone fishes, and where I hoped to find a trout. This vegetati 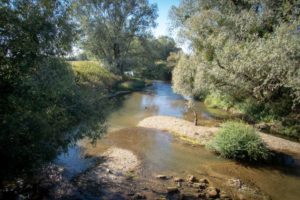 on was a stingy mix of blackberries, hawthorn and burdock. A sentence came into my mind, which some athlete had one said in an interview:

‘Sport’ means going to where it hurts.

Well, fishing was definitely sport then! Who would endure this kind torture just for fun? Minutes later I was still fighting my way through the vegetation, when suddenly there was no more ground below my feet. I fell, and two meters deeper some blackberry vines buried their thorns deep into my arms, but at least slowing down my fall and avoiding me hitting the rocks below. I was entangled, almost enchained. Somehow I managed to drop my rod slowly to the ground, then winding myself out of the blackberries, and down I went the remaining meter, ouch! The bank of the Cuissance had here been washed away some time ago, leaving a cliff-like slope which had been hidden in the vegetation. At least I was down at the water’s edge again. But trout I did not find here either.

When I decided to return to the car, I suddenly noted that my camera was missing… I must have lost it somewhere in the “jungle”… so I turned again, going step by step all the way through the bushes again, even crawling the blackberry-slope again… I did finally find my camera again, but I had to admit that sometimes, it is better to stay home. 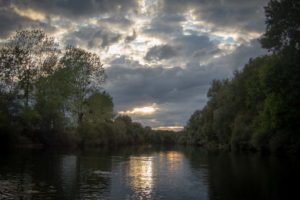 I finally concluded that here and now, in the lower Jura, I could not expect to catch one of the famous trouts. This summer was too warm, too dry… and maybe for some waters, there best years already lay behind them.

Where would you have to go to find cold, fast water where a healthy trout population could thrive? UPRIVER for sure, and as far as possible…. to the source!

Read how the story continued in the second part, which will follow soon.