Saturday was my birthday… but since my job involves a lot of interaction with people, I was not in the mood for a big party, I was longing for a full day of fishing: Just fishing, no hurrying to get home, no phonecalls to do, no picking up the kinds from sport… days like this have become rare, and so I had been looking forward to my birthday with great anticipation – almost like back in childhood days, when you couldn’t sleep the night before.

And on top of that, my best fishing buddy – my brother – came over all the way from Heidelberg to join me at the water.

The water was gin-clear, and we soon saw a pike here and there. But obviously they occasionally saw us aswell, and they were cautious and only followed our streamers without seriously attacking them. It was great fun nevertheless, very exciting, our hearts beating fast everytime a pike turned. I was watching my brother from the bank above when he was casting to a good pike which followed serveral times and came as close as 2 meters (7 feet). But at some point it just turned and drifted away slowly into the current…

The hours went by and towards the afternoon we still had not caught a fish. The daylight already slowly began to fade and it became evident,  that even this wonderful day was not forever. My brother decided to go back to the spot where he had seen the good pike earlier, and I just wanted to go a “little further” and then join him downstream.

What happened in the following one and a half hours, I will never forget… to cut it short, my nerves were already seriously wrecked when I decided to go to the spot where I assumed my brother was fishing. As I was strolling along, I noticed a big rock under water and thought that this would make a perfect spot for a pike. I approached further, and almost fell backwards when I saw a big dark shadow in that exact spot!

I went back a few steps and cast almost parallel to the to bank to retrieve the streamer upstream in between the rock and the bank. And the pike followed! It followed slowly, turned, circled around the streamer, disappeared in the deep. I cast again, this time perpendicular to the bank, and stripped very slowly towards me. 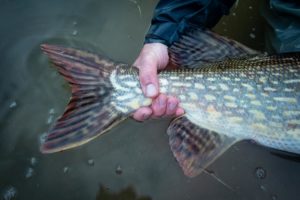 The pike appeared out of the dark and closely followed the streamer, almost touching it. I think I forgot to breath at that point, but then a second pike appeared, just as big as the first one!!!! They swam head to head behind the streamer, which had already reached the shallow water, my heart was beating heavily. “Please…”, I thought, “just one of you take it”! I slowed down even more, the streamer sank to the ground and I only twitched it very slightly. And then the streamer was gone! Within a fraction of a second, it had disappeared in the mouth of a pike. I set the hook, and it felt like hooking a log. The sudden stop almost took the line out of my hands, and an explosion of water followed. I jumped down into the shallow water and kept the line tight, so that the pike wasn’t able to reach the deep water, where it could have unfolded its full power and use the current in its favor. After less than a minute, the fight was over and the pike in my net.

With shaking hands I pulled out my phone to call my brother… and we both stood, heads shaking, to admire a pike of 113 centimeters (3 ft 6 in) and more than 10 kilograms (24lbs). What a birthday present! 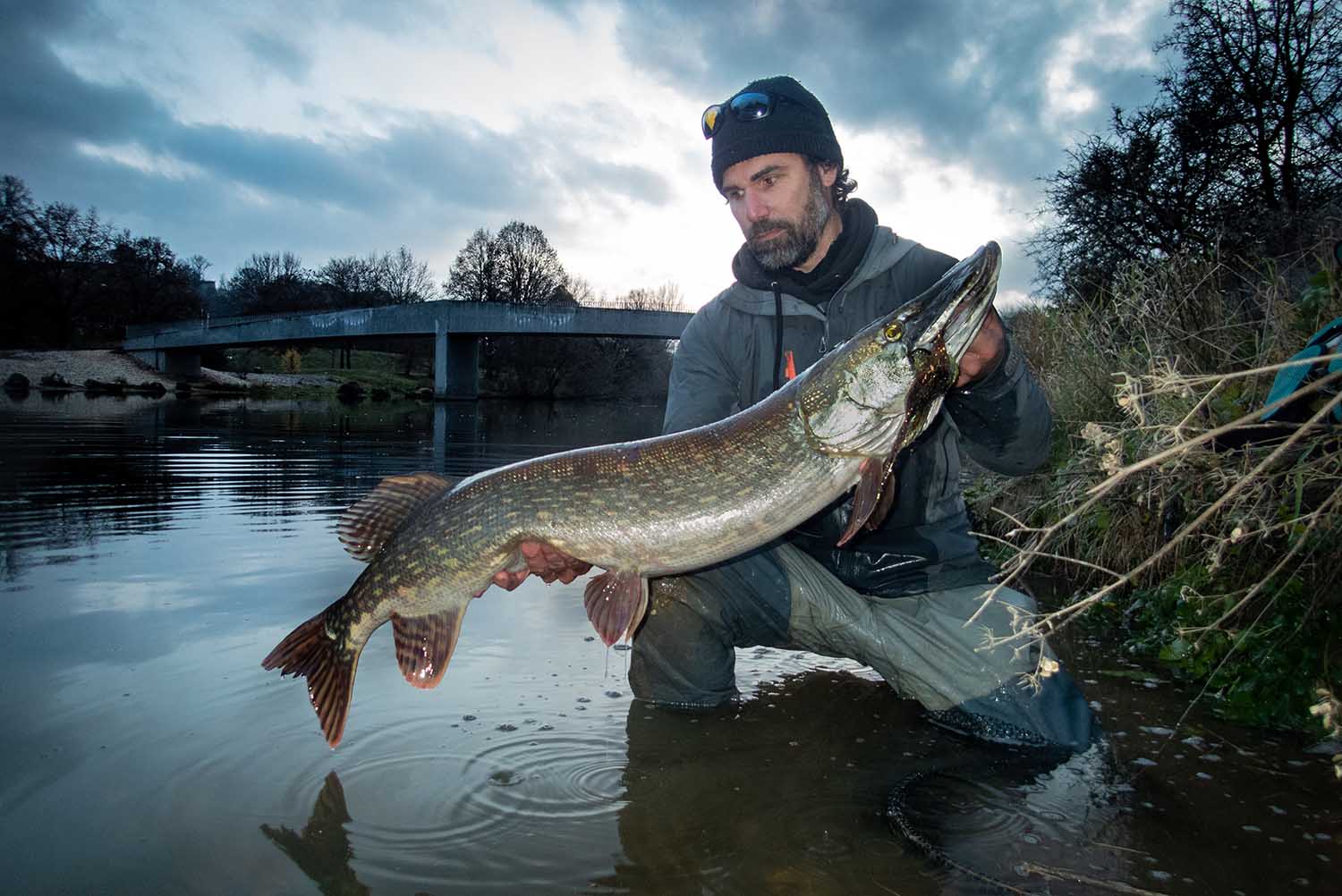