Mayflies have been hatching extensively for roughly ten days now. In general, mayflies start to hatch relatively late in our area, usually for about three weeks between mid-May and mid-June. If everything happens as usual, we are halfway through the mayflies, and I feel it is time to take stock. 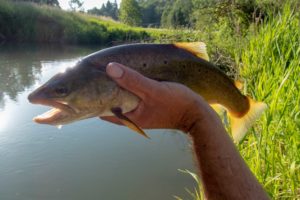 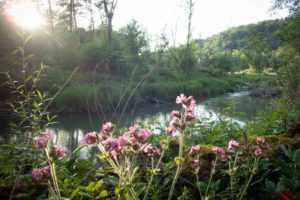 As always during this time of surplus, the fish are in perfect condition and even the small ones fight like hell! I though try not to cast for small ones… Large fish beyond 40cm can often be identified by the way they rise: they take the insects with more caution, more precision and therefore less splash, hardly any sound and definitely no slap on the surface with the tail. An almost soundless swirl on the surface is often a good indicator for a nice fish!

And I am truly surprised by the number of goodsized fish between 45 and 50cm, which I had the pleasure to make acquaintance with this season! I have the impression that it is getting better and better each year. Many of these found their way back into the stream, and I hope to meet them again some time!

the big aren’t the bold

My personal highlight on this little stream so far was a brown trout of 55cm! It left me several nights without sleep, as I failed to catch this cautious fish in the first instant: 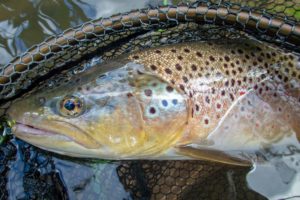 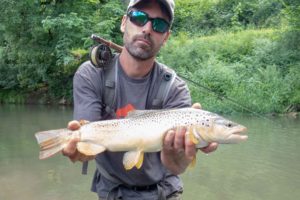 The recent thunderstorms had dusted the water into a light murky brown. Scouting the brookside I vaguely saw a good fish, hardly more than a bronze shadow, which was eating something under the surface. My various mayfly-patterns were completely ignored, until I trimmed one of my emergers so that it would sit even deeper in the water. The white mouth opened and the fly disappeared… I raised my rod, but a single headshake was enough to pull out the hook… DANG! 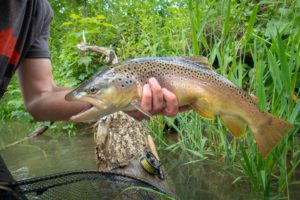 The two succeeding days I patrolled the stream in that area but there was no sign of the fish, I saw the fish in my dreams, speculated about its size, wondered where it was and how I could catch it.

On the third day, in the evening, I finally found it again, some fifty meters downstream, now eating duns rather carelessly, so it seemed. I feel pretty confident about the dun-pattern I tie, but the brown inspected and dismissed it on the first few casts… You don’t get that big by being bold, it was a very cautious fish! I took a step back and observed the fish for a minute, to internalize its timing. Then I made one more curve cast, and THERE it was! 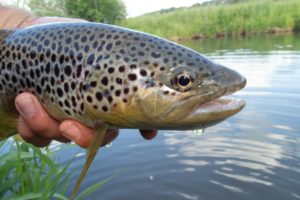 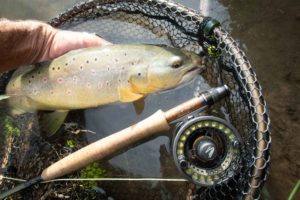 The slow rise of a good fish, which breaks the surface only with the tip of its mouth to pluck your self-tied fly, is surely one of the best moments you can experience in fishing! I had that moment already several times this year, and I feel the deeply grateful therefore! Besides this wonderful 55cm-brown, I caught many beautifully colored fish. Some with dark leopard-like dots, others almost without dots at all! Some were almost orange, others golden or a dark bronze. Each one of them a beauty of its own, no matter if big or small. 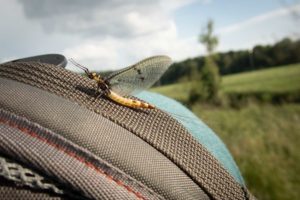 The fish seem to have satisfied their hunger for a start and so they are beginning to eat more selectively. Besides many mayflies which are still emerging, the sky is full of spinners which float dead (“spents”) on the water in the evenings – the dessert for trout after all that active feeding. To eat these spents, they just have to open their mouth, and there is probably hardly any way to eat with less effort involved.

Besides the mayflies, there are a variety of other insects hatching, bugs, sedges and other flies… and one or the other trout has already picked its favorite dish which is not so obvious to the flyfisher sometimes. But probably this is, what makes it so interesting!