Trout are still not really biting, although we are already far into april. Around that time of the years, fishing should be absolutely on! But it is not… although the trees are sprouting, everything is in bloom, spring is here, but fishing is not! 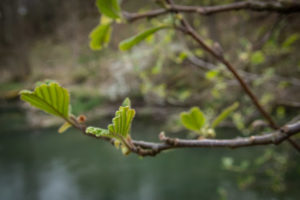 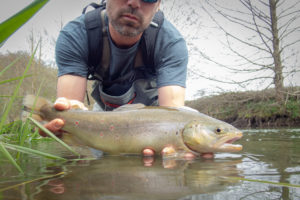 Some time around evening, a mid-sized brown shows mercy and gives me at least one good fish on the record. As I look at it in my net, I notice one of its dots which is both red and black, and somehow resembles the yin-yang-symbols. My thoughts wander, and I ask myself if there is some truth to the yin-yang-thought, to a divine balance to all things… the stronger you oversteer in one direction, the stronger is the amplitude in the other direction aswell…

Other anglers have said things like “those who have never prayed to higher powers, they have never fished for salmon” (John Hedberg, Sweden). Again other have a less divine, and more agricultural view of things: “you sow lures, and harvest pikes” said a friend of mine after he had lost several lures within short time on some underwater branches or roots.

So if there is anything about these thoughts, I wonder how this system works and where I stand? Is it rather like a care-bear-kind-of-beacon which you can use until your energy has been consumed? Last year has been my greatest fishing-year ever, from permit to salmon I caught many fish I have dreamed of… am I reloading my beacon at the moment?

Or is it rather like with the superhero “Green Lantern”, who has to load his ring BEFORE he can actually be a hero? The longer you load, the higher the price? May I expect with greatest modesty something extraordinary?

The good thing is, either way, it will get better… so Let’s get the party started!