Last year I had already spent my family vacations in the “franche-comte”-region of France, a region famous for its endemic brown trout. The search for these trout led me far up the Loue River, to its very source. This year, I hoped for a second chance and did some extensive research on the net to find streams and rivers in the vicinity of our holiday destination.

Through the internet I made contact with Sébastian, an excellent fisher and professional flytier, who recommended the upper Cuisance, a small stream I had fished further downstream the previous year. His recommendation gave me new hope, that I might catch something a little better than last year.

The stream was beautiful, a cold, blueish water flowing over little limestone cascades and deep pools. There were many insects and small baitfish, and here and there, I spooked one of the elusive trouts I longed for, but the fishing proved veeeeery difficult AGAIN!

These banded trouts (sometimes called “zebra-trouts” or “tigers”), blend extremely well with the ground, and are very easily spooked. Towards almost any kind of fishing they are very sensitive and they ignore everything they are not 100% sure of… European flyfishing legends such as Charles Ritz found them an extremely hard nut to crack, and I soon had to admit that I experienced the same!

In an entire eight hours of fishing, I caught only a small souffia and had one short contact with a trout on a nymph. I left the water clueless… and thought a lot about possible variations while I enjoyed a good glas of french wine. Most things I had tried during the day, streamers big and small, nymphs in all colors and weights, dries of various sorts… there wasn’t much left to try! The only thing which remained, was to go as small as possible… so I went back two days later, and while my family went to the market to shop for groceries, I rigged my 3wt and tied on the tiniest nymph I had – probably something like a size 18 hook. 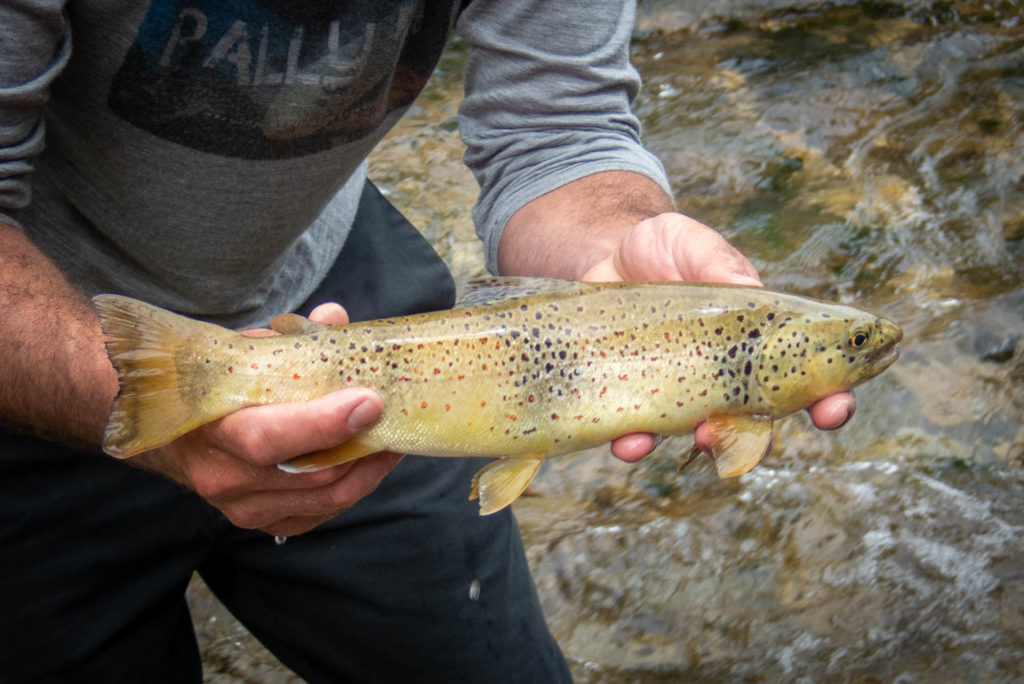 And suddenly it worked! What finally made the difference you can never tell – mybe it was the size of the nymph or the tippet, mybe it was the moon, the weather or just the right time… but I caught two trout within the half hour I had, and one of them was a really good fish, something probably just short of 40cm, in perfect condition, strong and extremely dynamic…

After some quick pictures I released this beautiful fish back into its pool. What a wonderful fish what a wonderful memory for sure!I hope to be back next year, I love these trouts – maybe BECAUSE it is so difficult, every catch is a dream come true.