This year, everything is different – I have repeatedly said and written this during the past months. And concerning the mayflies, I would say the same!

Whereas… not EVERYTHING is different, the mayflies hatch sooner or later. Always! And always there is the rare chance to catch big trouts on dry flies. 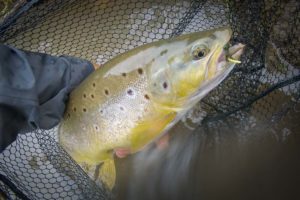 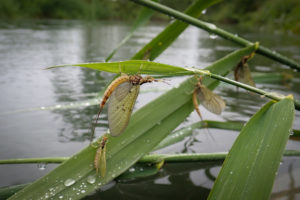 And always there comes a time when all fish seem to be fed up with mayflies, and longing for some variety they take something else from the surface… and you wonder what that is, and almost despair… because your mayfly just doesn’t get anyone excited anymore. Always.

This year, the exciting time when fish have discovered mayflies as a food source and aren’t yet completely stuffed up with them, was limited to only a few days, and each day only to a few minutes. Days, which according to the books should have been superb were rather disappointing and when the weather collapsed, temperatures dropped and it was cold and rainy, then suddenly the stream was “on fire”… everywhere it splashed and blobbed and whirled…. and I was torn between my fascination for the mayflies themselves and how the crawl out of their hulls to become something as beautiful as a butterfly…. and the urge to use the chance for a big fish. 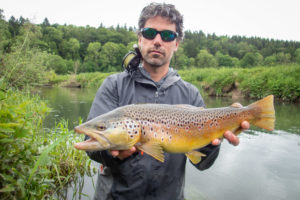 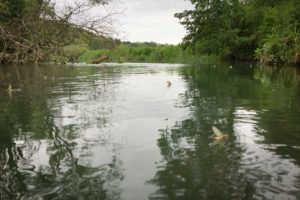 Anyway, I tried both, and I did catch some very good fish. But the hatch was over unusually fast and several times I had the impression that I was an hour late at the water. Not a single time this year, did I see a big fish rising regularly for a longer period of time.

But… maybe it would only be half as good if it was too easy. And so there still is absolutely no doubt, that mayfly-season is one of the nicest and most exciting times in the year. ALWAYS!

There will soon be a video on mayfly-fishing, I am having a lot of fun filming at the moment.