We had rain… lots of rain! The river is still full tot he brim, but this is it. The rain is through and suddenly summer is here. The evening sun is flashing through the trees, only rarely a cloud crosses the sky. But it has been very different for many weeks!

I have seen clouds moving in all directions at once, I have seen them move at speeds I had thought impossible. There was so much energy in the sky, it was very impressive (sometimes almost frightening)! Thunderstorms brought more water and the sun transformed it into explosive clouds again. Each time a little stronger, until we had to fill sandbags last week, because our fishing club filled with water… 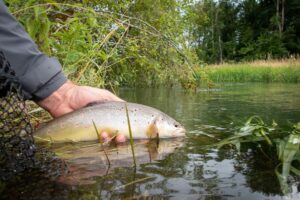 But looking back we still were very lucky! No hailstorms, and just the amount of water we managed to cope with… Our region is made up of karstic limestone and a lot of water is being absorbed by the ground, until it reappears – gin clear – in a spring, with some delay. The little trout river I usually fish, therefore rarely becomes murky. This only happens when freshly plowed fields are drenched in rain and spill over, into ditches and finally the stream itself. But this is only a matter of a few days mostly, and happend more often in sping than in summer. Also, the landscape around the stream is dominated by meadows and forest… we still have a tiny bit of an idyllic world around here. 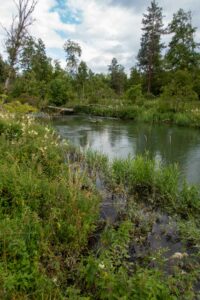 So after all the rains, the water is almost clear again, although it still is very high… but it looks healthy! A beautiful green-blue color, fast flowing, no algae, no mud… it rushes over stones and dead trees, and looks just gorgeous! And the fish are there! They have thrived on the „fast food“ they got delivered by the high water. In the evening hours, I even see a few fish rise to small hatching mayflies and caddis flies. Nevertheless I decide to use a small streamer and swing it across the fast water. And after several smaller fish I even catch a flawless 20“ brown trout. 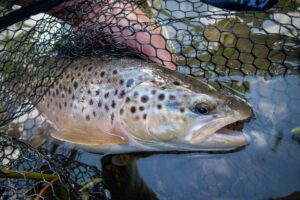 Water gives, and water takes. And water can destroy everything, as we have seen in other parts of Germany. With water, it is somehow similar to gunpowder: The tighter we pack it, the more explosive it gets. So hopefully we learn from the recent floods and let the rivers flow free again – so that the lives of those who died, have not been given in vain and such a catastrophe will never happen again.