Some fish haunt me more than others, some are different… and it is not necessarily the size of a fish which makes it so desirable to catch it.

Last year, I had already struggled with a trout I had encountered in mayfly season. Fish were rising, trout were biting, but not this one! It made beautiful rings on the surface, large, deep rings… but it ignored my flies. 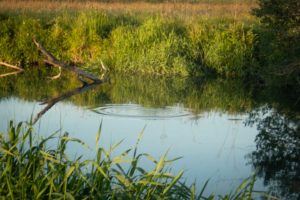 Now mayflies are here already, and although the peak is still to come, there are already some good fish on the surface, especially late in the evenings. So when I came by that spot from last year, there was again a trout rising steadily, and it was a good fish as far as I could tell.

Was it the same fish as last year? Problably I will never know for sure, but again this fish ignored the fly that so many others had taken on the first drift that very evening. So what was wrong? I tried different casts and angles, but nothing changed… and soon a family of beavers started a party right in front of me and the fish dissapeared somewhere…

That evening I realized that fish had already hooked ME! I had to catch this fish, it could not be that this fish was uncatchable! 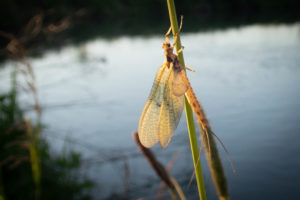 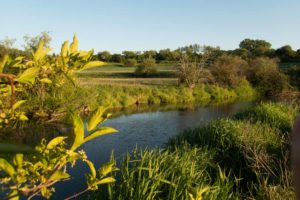 The next evening, same time, I stood at that same spot, and the fish began to rise again. But after it had turned down my fly again several times I found myself staring into my flybox, looking for an answer… I noted a “CDC deltawing mayfly” which I had tied only a few days ago after a pattern by Roman Moser, and I decided to try it altough it looked very unconventional. But something needed to change, my casting and the drifts had been good.

The first drift with the new fly finally brought the long awaited and strongly desired BLOP and the fly dissappeared. It was wonderful! 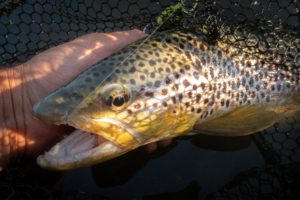 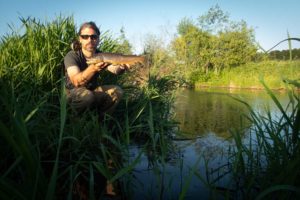 The trout was indeed a very good fish but not exceptional concerning size. Still, having finally outsmarted this clever fish was a very satisfying feeling, I was very happy that evening and still am when I think of it!

But the peak of mayfly-season is still ahead, I am excited to see what it will bring!

The trout btw. had its entire mouth full of mayflies, and the presence of hulls and the overall shape of the mayflies indicated that it had intercepted the mayflies just shortly before they lifted off the water surface, so the deltawing-pattern had hit the mark! 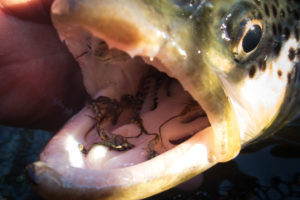