There are probably not many people who know the waters of Southern Germany better than my good friend Patrick. We both share a passion for small, naturally flowing streams and when he invited me to fish such a stream with him, I was immediately hooked!

He sent me a couple of fish pictures through FB-messenger, which increased my anticipation even more… He didn’t reveal much about that stream but promised me, that I would love it: no roads, few hikers, a small valley and a stream which has not been stocked for many years – so all the fish were wild. But what stream was he talking about? Patrick kept me in suspense… 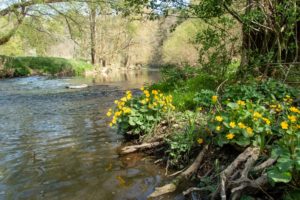 “Where should I come to, where do we meet?” – “TOP SECRET” was Patricks answer 😉 . A secret meeting point? How was that gonna work? But yes, in a way good fishing waters are nowadays being protected like state treasures… Was I being brought to the water blindfolded?

Well, gladly it wasn’t like that, but sometimes it is really better not to name a good stream. Especially small streams are easily overfished, but that surely wasn’t the case with this one. Patrick hadn’t promised too much: a wonderful valley in the limestone, the stream meandring through a lush green meadow, the trees looking like Treebeard from “Lord of the Rings”… 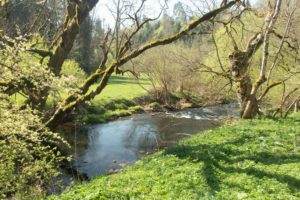 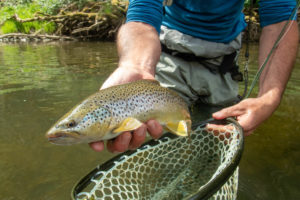 The fishing was tricky, as always in such little streams: wild fish are clever, the water was clear, we fished with light leaders, approached the spots on our knees… fishing as we love it!

But I was surprised to learn that you could approach the fish from behind, in the water, relatively close… whereas they were easily spooked if you walked on the bank beside them, even if you were several meters away. If the fly line would only drift over them once, they were gone. So I did learn a lot that day, fishing new waters is the best teaching you can get! 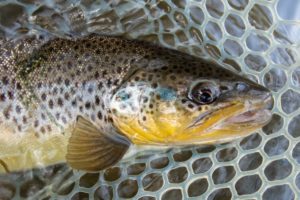 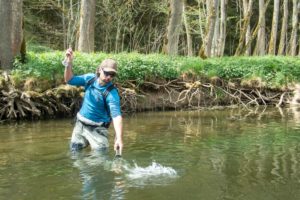 The fish were all extremely beautiful and strong. A brown trout with more than 50cm swam slowly in front of us several times, but it was impossible for us to catch. On some spots I could have stayed for hours because I was sure there had to be a big fish! But Patrick pressed me on, he wanted to show me the entire stretch, which was definately a great thing, because in the last big pool, I caught a last good fish. Patrick often let me fish first, and gave me good advice, which was really great!