Mayflies are truely magical creatures. They are connected to big trouts and dryflies, but there is more about them…

The first mayfly usually appears sometime around mid may, and when someone discoveres it our entire family will sponaneously gather to a 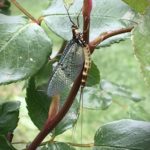 dmire it. Even those who are not fly fishing, will admit that it is a beautiful insect. In flight, you could almost take it for a butterfly, because it is considerably larger and not as hairy as other flying “bugs”. This year, the first mayfly appeared in the garden of my parents, on a rose bush. From then on, the waiting began…

From day to day, the mayflies appeared in greater numbers, and the fish soon discovered them. As every year, it would be a matter of time, until the big fish joined the feast. But the big fish come late and disappear again early, so there is only a short period which you somehow have to discover, either by luck or intuition. 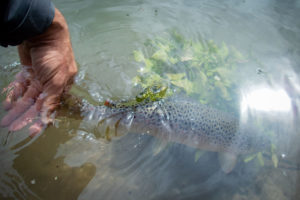 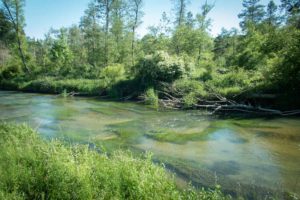 The stable weather in the second half of may, made it difficult to foresee when the massive hatches would take place. What hints were there? How had the vegetation proceeded and how was the mayfly hatch timed in other rivers? Was everything a bit earlier than usual? Would I be there when the water was boiling? Family, job and mayflies are not easily combined… in the last few years it had been more predictable, there were thunderstorms or weather changes which triggered the big hatches. I remember days when I was driving with my car through a thunderstorm to get to the water. Mayflies were hatching in such great numbers, that they were covering my windshield! Surely, fishing in a thunderstorm is not the best idea… but I wasn’t able to withstand the magic of the mayflies.

Hatching mayflies are magical in itself. Sometimes I set my fly rod aside and just watched… or pulled out the camera. 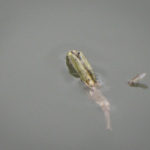 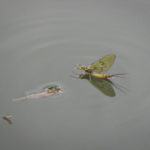 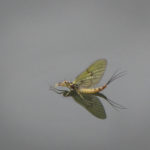 To me it still is something like a miracle, that within seconds, a flying insect emerges out of a swimming larva. For butterflies, I can somehow imagine that a transformation happens within the solid cocoon. But a transformation within a swimming, crawling, feeding larva into something which is flying and breathes air?  Magical!

During the dry and clear weather there were only short periods during the daytime, when fish rose. Only in the late evenings the activity increased  – which was very work- and family-compatible! The new mayflies I had tied up worked perfectly, no matter if it was just the beginning of the hatch or the spinnerfall in the end of the day. And so I was able to land several dream fish well over 20 inches. 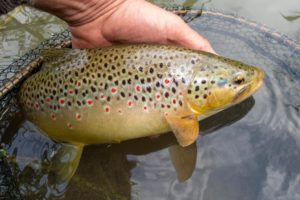 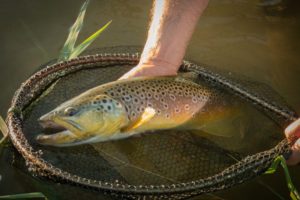 Even the smaller ones fought very well – the were strong from all the high-protein food and had a shape almost like a football!

When the weather changed a few days ago, the daily pattern shifted a little bit, but in general, it stayed the same – the big fish only came in the evenings.

The wind made casting difficult sometimes, but the mayflies similarly struggled, trying to lift off the water surface – and failed sometimes to the pleasure of the trouts which were now in the land of plenty.

Yesterday evening, in the last light of day, this year’s mayfly season so far culminated with an extraordinarily colored brown trout! The back was similar to a marmorata-trout, the flanks were rose and the belly a dark gold. What a beauty! It was hard to capture on photo, because the light was not very good, but this fish will surely be remembered for a long time! 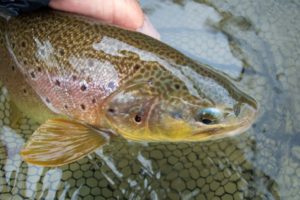 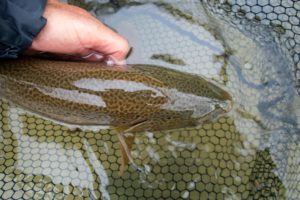