When the end of the trout season approaches, my thoughts are slowly circling around the question what remains to be fished, and how and where I want to spend the last days of the season… and this somehow coincides with the nights getting colder and the air clearer, which makes it possible to see the beautiful mountains in the distance (the Alps – the highest mountain range in Europe). And I am reminded of the beautiful light and the mightiness of the landscape above the treeline… and I yearn for the calmness of the high altitude.

So I decided to write a message to some of my Swiss friends, if anyone of them would be going fishing in the mountains towards the end of the season…? And luckily they replied and a few days later, I found myself standing in front of my friends house in Bern, the capital of Switzerland.

Even before the rest of our group of four arrived in the evening, Rolf and me made a quick escape for an afternoon session on one of his favorite mountain streams. The landscape was breathtaking, you can hardly believe that you are in one of the most densely populated areas of the world… and the Alps are in the center of this crowded continent, somewhat like a reminder that nature is impregnable. 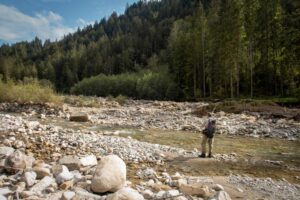 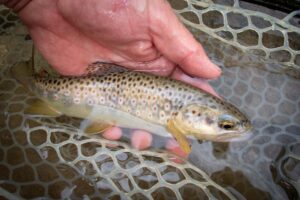 At first, I had to get used to this kind of fishing, which is a lot different to what I usually do. I had to realize that it is not about fishing a perfect drift asf. but about precisely placing your fly in a tiny spot and keeping it there for as long as possible – a second is usually enough to lure the trout to the surface. The pros call this kind of fishing “pocket water fly fishing”. As soon as I had realized this, I was catching fish! 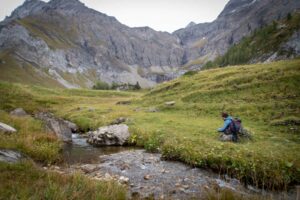 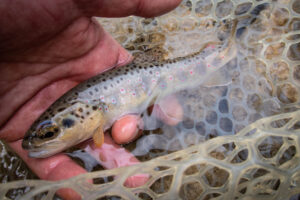 The fish at this altitude are small, but they are true survival specialists. Half of the year, the area is covered in snow and ice. Sometimes there is hardly any water, one or two rocks for shelter and still there is a fish in this spot! They have to eat whatever comes along, and although they grow old, a fish beyond 10 inches is massive! Most fish are around 6 inches, an 8-incher is already pretty good. But they are beautiful and the fishing is very challenging… you have to anticipate the good spots before you are too close, you have to climb and crawl, and cast perfectly. And you only have one chance! The fish will usually not rise a second time.

My friend Rolf, who had organized and is very familiar with the area, had selected a handful of beautiful little streams which we fished for the next days. His friend Fabian even let us use his cabin in the mountain, it all came together perfectly. We fished a great variety of streams, from high mountain valleys to steep cascades, streams with limestone pebbles and others with granite boulders… it was simply awesome! 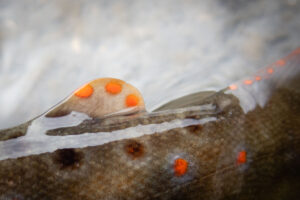 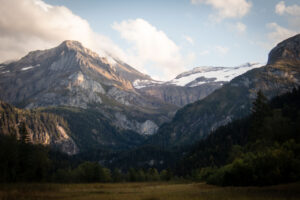 The only bad surprise was the fact, that some of the streams had been affected by the heavy rains during this summer a lot stronger than we had expected. Some streams had been completely washed out, no stone had remained were it was, and big boulders, broken trees and roots indicated, what had happened here three months ago. And although brown trout are relatively flood-proof, this must have been too much. In some streams, we did not find a single fish. 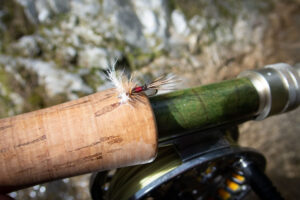 Concerning the flies we used, the choice is relatively simple: the fly has to float well and have a good visibility. I chose a Royal Wulff, which is a very beautiful, traditional pattern for such situations. I tie them myself on size 14 TMC100SP-BL hooks. I fished a 9ft 4wt rod, some of my friends fished 3wt rods in 7’6’’… in the end it is a matter of what you feel comfortable with.

Many thanks to Rolf, Dani and Andreas for the good company and Fabian for the cabin and the awesome dinner!

Because it is hard to describe the many impressions of this trip in words, I will simply add some more pictures….